I come to you with heavy heart today, my friends. Tomorrow night marks the end of an era. At exactly 8 PM Eastern Standard Time tomorrow, January 31st, 30 Rock will light up our television screens for the very last time after six glorious seasons of laughter and joy and friendship and ham.

I’ve had “30 Rock Finale” followed by three frowny faces written on my calendar for months and am celemourning (which is a new word I just made up when you celebrate something sad. Copyright!) by hosting a Liz Lemon Party, and you know what they say:

I’ll be in costume as my fave gal (pictures on Friday, I promise!) and I’ve tried to convince others to come decked out as well. We’ll dine upon Night Cheese, Sabor de Soledad and sandwiches. Someone will shotgun a pizza. White wine will be served for the Lemons among us, whiskey for the Donaghy’s. It is going to be epic…ally nerdy. Just like La Lemon herself.

Much has been written about Liz Lemon as a character – is she a realistic portrayal of a modern woman? Is she a feminist? Is she hot? – but I won’t get into that. For me, Liz Lemon, and by extension her creator Tina Fey, was just great. Plain and simple. Bananas as she was, from the moment Jack Donaghy correctly identified her “type” in the pilot episode, I knew this was my kinda gal:

I had big plans to put together my own lengthy retrospective on 30 Rock and what it means to me and how it has shaped the landscape of the future and women and can we have it all and blergh! But no one cares about that. We just want to laugh!

And so, in lieu of my own tribute, I thought I’d share some of my fave links from around the web that other more industrious writers and editors put together to honor the departure of The Greatest Show Of Our Time. Enjoy! 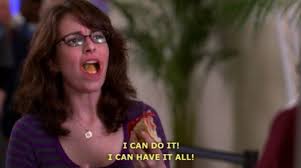 Annnd that should be enough to keep us all busy for the next two days. So, let’s talk! There’s no need for any of us to face this impending loss alone. What are your favorite 30 Rock episodes/moments? Do you think you’ll cry tomorrow? Are you happy Liz is finally adopting? Favorite characters? Do you prefer sandwiches or pizza? CAN WE HAVE IT ALL???